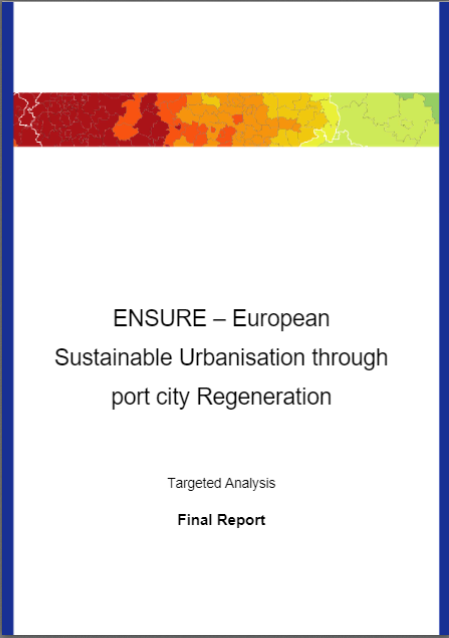 Port cities have historically been an essential element of European society and economy. Despite overall growth in maritime transport, many European port cities are experiencing the relocation of port-related activities from central areas to other locations. The loss of this economic activity is leaving deteriorating inner city areas. Today brownfield waterfront sites are strategically valuable but their development can be hugely constrained by costs of decontamination treatment, plot fragmentation and complex landownership.

The challenge of port city regeneration has been a topic of debate in several Committee of the Region workshops in recent years and the subject of at least two policy briefings to the European Parliament in November 2016 and May 2017. Globalisation offers an opportunity for port cities to use these old industrial waterfront locations to revive their economy, to strengthen their magnetic pull, to become hubs of innovation and to act as leading examples of sustainable urban planning, ensuring their long-term competitiveness as economic drivers within the EU (European Parliament, May 2017). With the ability to tackle some of the constraints, port cities are ideally positioned to act as beacons of sustainable [1] urbanisation, meeting the global development challenges associated with increasing urbanisation (70% global population will be urban by 2050).

Smaller cities with a thriving economy and high quality of life are often the location of choice for millennials across Europe. The sustainable regeneration of port cities can drive EU growth in the modern economy while leading the way in urban liveability.

The ENSURE targeted analysis will learn from port cities which have had success in the regeneration of their former port areas and will help to better define the contribution which regenerated smaller port cities can make to the collective socio-economic health of the EU. This activity will result in a unified repository of the critical enabling elements of transformation and development within smaller European port cities focused on funding, knowledge, regulation, citizen engagement, governance and other catalysts. It will build the evidence base for policy making to support the redevelopment of port city areas across Europe. There is no one size fits all but with a unified repository, cities can more easily determine their own solution. There may also be opportunities to develop critical mass between smaller cities through collaboration in certain areas.

Stay in the loop of Circular Ports

Be the first to receive free email updates.

Manage Cookie Consent
To provide the best experiences, we use technologies like cookies to store and/or access device information. Consenting to these technologies will allow us to process data such as browsing behavior or unique IDs on this site. Not consenting or withdrawing consent, may adversely affect certain features and functions.
Manage options Manage services Manage vendors Read more about these purposes
View preferences
{title} {title} {title}